Chat Commands and Emotes - What are they?
Chat commands or "emotes" are words sent on a chat channel to either command a device to do something, or send chat to the people near you.  Typing something in local chat actually is on Channel 0.  Many scripted items such as curtains, particle effects, etc., are programmed to be controlled via a certain chat channel.  We refer to anything sent on a channel an "emote."

You can send chat commands in a number of different ways with Performance Director.  Each has its benefits and it is up to you how you would like to send commands or emotes to your props and the audience.

For example, you can have your Performance Director say "Welcome to the Show!" on Channel 0 (local chat that everyone sees) and send a command to open your curtains.

NOTE:  Lines cannot be more than 255 characters long, including spaces.

Command Method - SAY, SHOUT and REGION SAY
Use the appropriate command based on the size of your venue and distance from you to an object you want to command.

Commands / Emotes
You can send multiple commands at the same time.  Commands can be sent to objects such as the Glow Fader, particles, curtains, lights, etc.  Objects must be on a channel and the object script must allow it to be controlled from an object you are wearing.  More about Emote Spoofing here

Download File
THE FORMAT
Time | Command Method : Channel : Command OR Emote Text
No spaces before or after pipes and colons!  They are used here only for clarity.
EXAMPLE COMMANDS
This example shows the commands to turn on and off for the Spot On Glow Fader using Region Say on channel 89:
25|RS:89:show
​50|RS:89:hide

This example shows shouting text to the audience at 10 seconds into the routine:
10|S:0:Welcome to the show!

MULTIPLE COMMANDS
Multiple commands that happen at the same time can be written on the same line.  Separate commands with a pipe ( | ) character.
0|S:0:Welcome to the show!|RS:52:opencurtain

This example shows multiple commands on one line and uses the feature command ONLOAD to sends commands to Stage Manager to rez a set and to Costume Assistant to change an outfit as soon as the notecard is loaded.
onload=SAY:42:showgirl set|SAY:44:change showgirl outfit 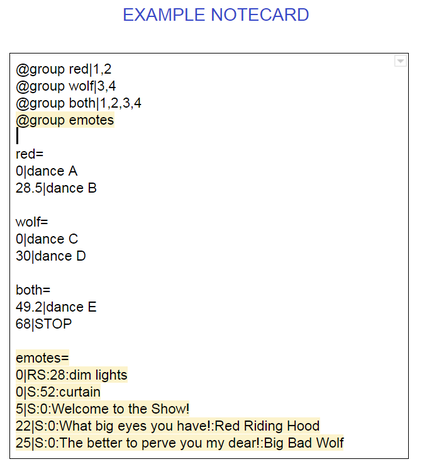 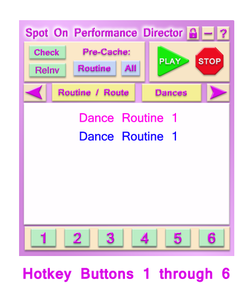 The hotkey buttons are used to send chat commands to such things as set rezzers, stage props and equipment, particles, etc., at the touch of a button either before or during PLAY.

Example of multiple commands assigned to a hotkey.  Separate commands with a pipe ( | ) character.
@button1=RS:51:curtainopen|RS:25:lightsdim|S:0:Welcome to the show!
Private Message - PM
Sends a private message to a specific dancer group and all of their attachments.  An example of using this feature would be for the Costume Assistant:

All of your dancers are wearing Costume Assistant and all are on Channel 44.  You want to change dancers 1 and 2 at 60 seconds and dancers 3 and 4 at 120 seconds.  Using Private Message (PM) alleviates the need for different folders and channels on the Costume Assistant.