Beginning with the Spot On Performance Director HUD 1.5, you now have the added feature of Layering Animations.  If you are new to the Performance Director, please review the directions  of how to use it with either the Choreography System or Group Formation System, as well as the Timeline and HUD Controls first.
What is it?

What layering animations does is allow the dancer to appear to  start an animation somewhere other than the real beginning of the  animation.  We have been able to end an animation whenever we want simply  by starting the next, however now you can end an animation and transition into one that is already playing in the background.   The trick of course is in the timing and what the choreographer feels looks best.  Also,
success with layering is HUGELY dependent upon animation priorities set by the animation maker.  We have no control over that.
How does it work?

By starting two (or more) animations with the “time|START:animation name” command in the Performance Director at the same time and having one override the other.  By using the START: command, the animation will not stop when the other is started but rather will continue to be active in the background until it receives the “time|STOP:animation name” command (or the STOP button is pressed).  Other dances in your sequence can still be written in the normal way of “time|animation name.”
Important Considerations:

START and STOP Commands:  When beginning an animation using the START command, you MUST use the STOP command in the routine or that animation will continue to play in the background. 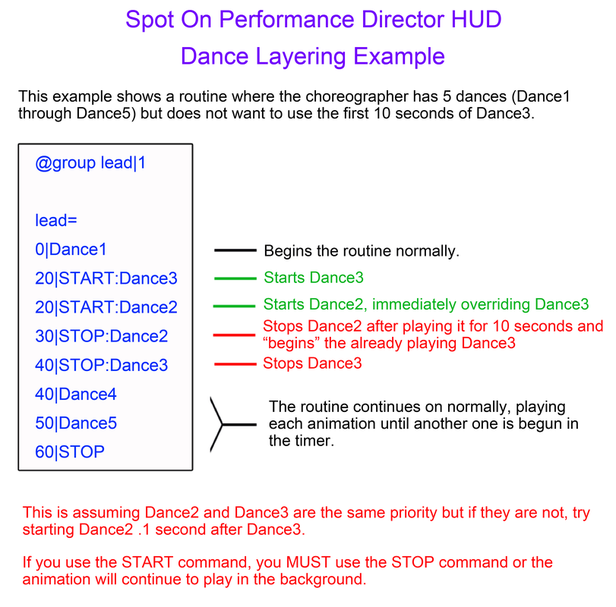